Two, four-yard diameter cirles should be drawn on the ground 30 yards center to cernter. The candidate must deliver their flights from within one circle and may choose either end of the court for any throwing or catching group.

The catcher is free to move anywhere within the 4-yard diameter circle but is prohibited from stepping outside of it while attemptiong to catch.
The candidate must complete the proficiency test within a 60-minute maximum time period. Only one such attempt may be made in any single day.

The candidate may schedule the following flight groups in any order they wish.

* Rollers must be rolling for at least one-half of the distance to the catcher. Curve, straght and catching criteria are identical to tother flights.

The following flights need be made with only one delivery style. Three consecutive good flights constitute completition.

The candidate just obtain an average distance, in four consecutive flights. 2 up-wind and 2 down-wind, of not less than 75 yards. Women and seniors (45 yrs. or older) 60 yards.

The candidate must do both of the following self-caught flight options:

1. Maximum Time Aloft- Candidate must throw the disc into the air and then catch it cleanly in one hand before it strikes the ground.  TTime is measureed from the release to the first contact of catching attempt. Two consecutive eight-second flight required

. Throw, Run and Catch - Candidate must throw the disc into the air and then catch it cleanly in one hand before it strikes the ground. Disctance is measured from the point of release to the point of first contact in catching attempt. Two consecutive 140-foot flights are required.

All of the following combination catches must be executed once: 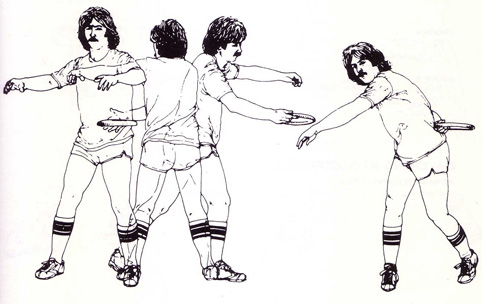