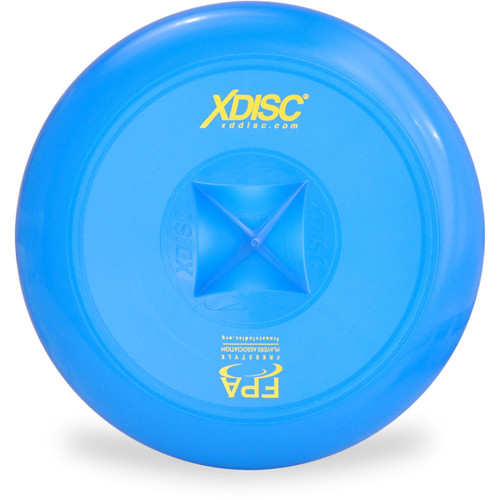 XDISC shatters the status-quo, traditional å¥ÌâÌ¢at å¥ÌâÌ¢ying disc design concept in both form and function. The features listed here help show the magnitude of change created by the central pyramid, dished å¥ÌâÌ¢ight-plate, and the advanced aerodynamics built into XDISC's design. XDISC is the direct descendant of early versions of the concept, PYRA-DISC and STARDISC (see Origins). Now, with XDISC, all the elements of the paradigm shift initiated with it’s earlier version have been reå¥Ìâåned and perfected for å¥ÌâÌ¢ying and gaming perfection.

Because of XDISC’s evolutionary shape, the aerodynamic property known as the Coanda Effect occurs. This helps beginners get good å¥ÌâÌ¢ight and improves performance.

The pyramid acts like a rudder, creating two equal airå¥ÌâÌ¢ows on either side, noticeably stabilizing XDISC’s å¥ÌâÌ¢ying characteristics.

XDISC’s concave å¥ÌâÌ¢ight-plate and four-sided pyramid provide many improvements over å¥ÌâÌ¢at disc aerodynamics, but there’s even more design elements that make XDISC unique. Advanced rim-ratios, variable-tuned wall thicknesses, and no ejector-ring scarring are all exclusive XDISC improvements that provide a better gaming and å¥ÌâÌ¢ying experience for everyone.